Neither Rain nor Sleet 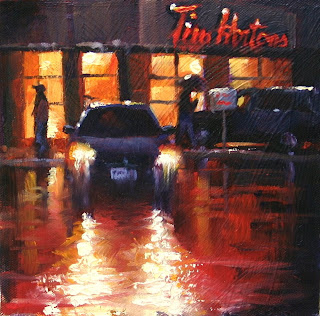 8x8 Oil on Canvas Sold
Tim Hortons is a "famous" Canadian coffee place. Probably one in five Canadians can be seen with a Tim's cup in hand at any given time. On a rainy day, our local Tims is a  great place to park and watch the vehicles at the drive through and  the people running for their coffee fix. And there's always great reflections.
I am pleased to say that I have joined a painting group called "Daily Painter Originals". This is a very talented, personable, creative group of artists, and I am proud to be part of this "on line gallery."
If anyone is wondering where Myra has been, she has been in the Hammer with me at Tims, drinking coffee and eating timbits. This coffee painting is dedicated to Myra who is now back on line. Visit her blog here for some light hearted fun, some great art, and lots of stuff about coffee.
Happy Canada Day! 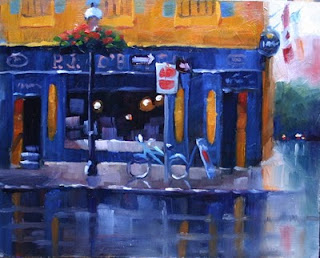 8x10 Oil on Board
Love the colors and setting of this Pub in downtown Toronto. The blue bicycle parked in front added to the melange of blues in this scene.
Posted by Catherine Jeffrey at 8:15 AM 11 comments: 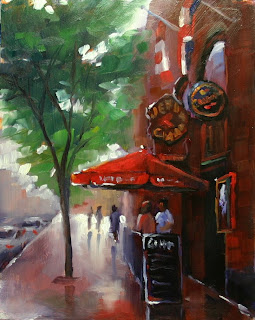 8x10 Oil on Board
I am having a good time doing these looser smaller pieces. It is a nice break from all of the time consuming larger ones. This pub is called "Jersey Giant" on Front Street. The rain has stopped, and some light is starting to shine through the trees. 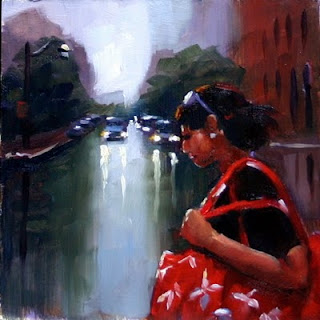 6x6 Oil on Board Sold
I have been starting these last four paintings using a larger brush and getting as much information down on the surface before switching to a smaller brush as suggested by Mike Barr in an earlier post. I think it does make a difference. I know I fussed a bit with the young woman's face, but I do need some practice painting people. It has been awhile since I have done portraits. Some things I have learned lately that I try to pay attention to:
If the color you apply over an existing color looks muddy, it is usually because it is the wrong temperature, not because you mixed a "muddy" color.
Start a picture with a brush that seems too large for the scene, and do details later. The dabs of highlights applied at the end will "pop".
In warm light, use cool shadows. In cool light where the object has cool colors, use warm shadows. I'm still working on this one. Red is a difficulty for me.
Do a value study!!!!!!!!
This young woman walks down Church Street in Toronto, crossing Front Street in front of the Gooderham Building.
Posted by Catherine Jeffrey at 8:19 AM 9 comments: 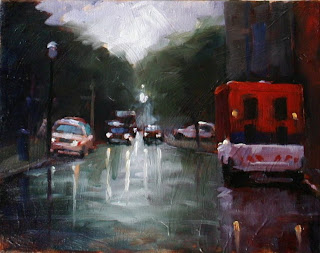 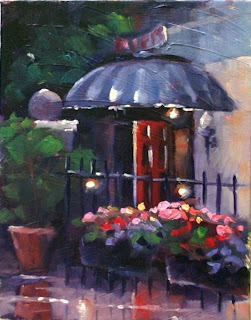 8x10 Oil on Canvas Sold
I've been enjoying some of the colorful touches in the scenes on Front Street. Front Street has great shops, coffee bars, pubs and the St. Lawrence Market. In this scene, the red door is open, as if to say,"Come on in, its raining, the coffees hot and the beers cold."
Posted by Catherine Jeffrey at 8:03 AM 4 comments:

Queen and York, Toronto On 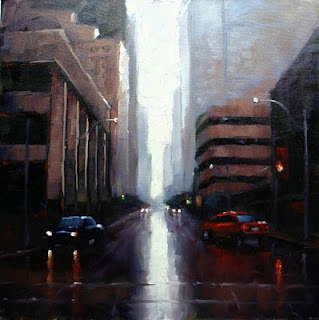 18x18 Oil on Canvas
We can learn a lot from fellow artists and their comments. Mike Barr paints beautiful rainy scenes and absolutely amazing beach scenes, all very atmospheric. He recently left a suggestion on one of my postings to try something different. He said to "do a whole painting with a fairly big flat brush then spend just a few minutes at the end with a small one for detail..it will help your painting a lot and it's FUN ;-)"
I tried his suggestion with this painting, and I think I like the result. I probably spent a little too much time on the details but everything takes time. Check out his work here.
Posted by Catherine Jeffrey at 9:12 PM 12 comments: 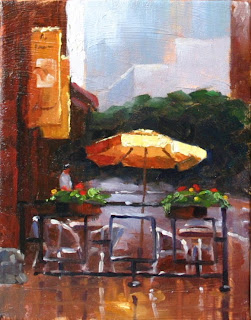 8x10 Oil on Canvas
I love the rain, but almost everyone else is a sun seeker. This adage would apply to the owners of these lovely outdoor patios that sit vacant during a summer rain. This patio is at the Papillon Restaurant on Front, a couple of doors down from the Expresso Bar I found when storm chasing.
I recently rented a couple of  DVD's by Richard Schmid. He is so methodical and careful in his placement of paint and brush strokes. I was amazed. In one segment, he talked about using a knife to get a nice crisp line. He said that you have one go at it...it must be done right the first time... to which I thought to myself, "Not in this lifetime :)" 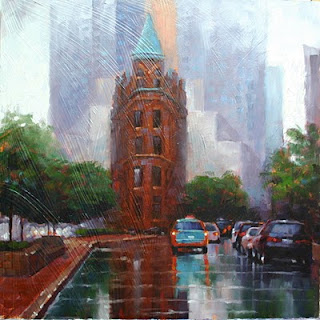 18x18
Oil on Canvas
This building is Toronto's "Flatiron Building", similar to the examples of this style in New York and Atlanta. It forms a wedge shape at the corner of Wellington and Front Streets. Its color stands out in an area of light  high rises. It was a challenge to make it fit in. I actually waited for the turquoise taxi  (a common sight in Toronto) to show up and snapped a few photos. I thought it would balance nicely with the turret color.
I have been having a look at Richard Schmid's  book and decided to try two colors he uses. Viridian and Terra Rosa. Mixed with other colors, one can make some amazing grays. For the background buildings, I used Terra Rosa with cobalt blue and white. Also, viridian and alizarin crimson makes a nice dark green. Having his color charts in the book really helps :)
(Sorry for the photo glare...will get a better pic later.
Posted by Catherine Jeffrey at 5:27 PM 5 comments: 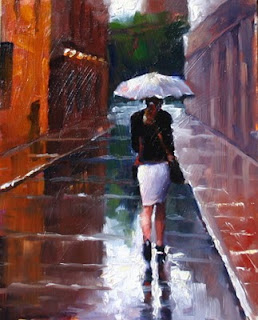 8x10 Oil on board
Storm chasing can be a lot of fun, especially when there are lots of great scenes to be captured. A few days ago, I headed into Toronto when the forecast called for stormy weather. Mother Nature cooperated, and there was a wonderful steady rain. I took lots of photos so hopefully I will be inspired by a few! The best part of the trip was discovering an espresso bar where I had the best latte that I have ever tasted!!! I love Toronto.
I am finding that getting ready for this show is creating anxiety in my life, and putting a damper on my muse. If anyone has any suggestions on how to de-stress please send them my way! (Of course I am trying to finish every painting I wanted to take along.)
Posted by Catherine Jeffrey at 3:11 PM 12 comments: