Fall colors on the Trail, Dundas On 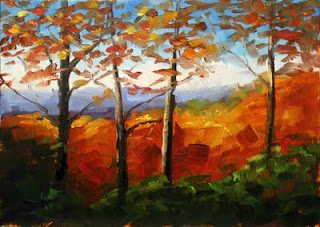 While walking the dog on the trail this morning, I was marvelling at the magnificent fall colors at this time of year. I was also wondering if there was a way to capture the brilliance. I took some photos. Photos don't always capture the reality of what we see, but I had the scene fresh in my mind. It really was a difficult subject. I was wondering how I would put the subtle tree leaves over a wet sky. It is so important to do a lot of small studies and then take what we learn to the next image. 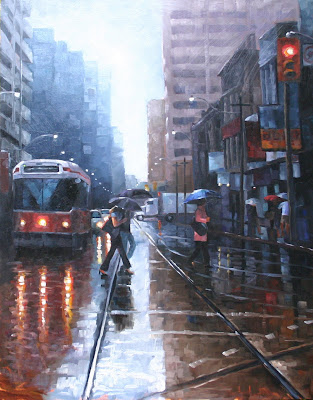 I learned several things while doing this painting. Space is important. Being in such a small studio space, I had to drag this large painting into another room several times to stand back and look at it. Also, an area dedicated to photographing is important. Glare from lights, or outside on a windy day just doesn't do it. As in a smaller painting, its important to keep the areas of value consistent. Working large, I found it easier to get fussy with areas and get too busy rather than focusing on the "big picture". I have learned a lot, but I think I will go a bit smaller until my space is ready.

People are crossing Queen Street in Toronto on yet another rainy day. This painting isn't quite finished. I need to add streetcar lines and rework a few values. 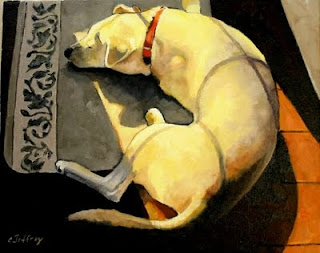 Our house is a stone cottage built around 1850. It is in a constant state of renovation. We are in the process of putting a studio space in the attic( yay!) so that I can move out of the 8' x 8' room I am in now. My husband does most of the work, but I help out when I can and therefore, my painting production will be down a bit. It has gotten quite chilly here, almost going to freezing some nights but staying around 50 or 60 degrees during the day. We don't turn the furnace on until Nov. so the house is pretty cool at times.

Our dog Bailey has found a warm spot in the sun.

Posted by Catherine Jeffrey at 8:53 AM 10 comments:

Praying to the Wind Gods 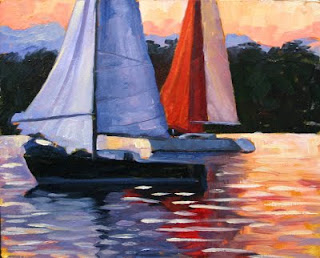 Oil on Foam Board

Racing sailboats at this time of year can be frustrating. As the sun goes down, the wind dies and leaves sailboaters quietly waiting for a puff of air, their spinnakers hanging in the breathless evening. Everyone "prays to the wind gods" in hopes of getting the air first. The setting sun also creates the most spectacular sunsets. 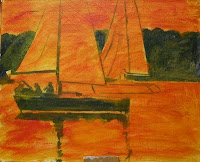 With many of my paintings, I do a drawing in black acrylic paint and then I identify the darkest darks which I paint in black acrylic. I don't want to lose this dark value during the painting process. I then coated the surface with a mixture of cadmium yellow dark and transparent red oxide. I also added a bit of magenta because the sky in my photo was so pink in parts. I am an impatient painter and acrylics dry so fast, so I use acrylics for this step as well. Sometimes I do the mid value, but decided to leave it all orangy yellow so that spots of it  would show through and hopefully add a glow to the painting. I then start painting with the oils. I was wondering, is hearing about a painting process interesting, or boring?