A trip to France 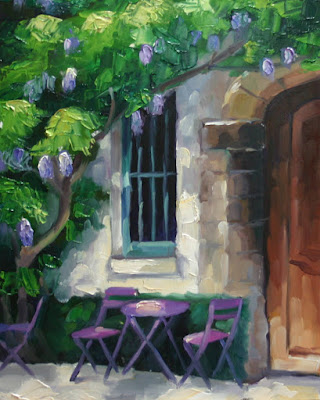 Au Vieux Paris D'arcole, Rue Chanoinesse
8x10 oil on Panel
In May, I had the opportunity to visit France. My sister and I took a Viking River Cruise from Paris to Rouen in Normandy and then spent 3 days in Paris. I had never been to Europe, and although I was somewhat familiar with the architecture and culture that I was excited to experience first hand, I was equally impressed with the countryside, lovely small towns, and history that goes with them. I was also amazed with the greenery and the parklands all over Paris. The chestnut trees were in bloom, and they could be seen everywhere, often trimmed and in rows. Such a feast for the eyes, and so much inspiration for an artist.
This restaurant was just around the corner from Notre Dame Cathedral on the Left Bank of the Seine. It was covered in wisteria, which luckily happened to be in full bloom!
Posted by Catherine Jeffrey at 12:56 PM

How lovely. Lucky you. I love France, and Paris. Super painting.

Really an inviting scene, Catherine -- love the colors, and I can feel the sunshine!