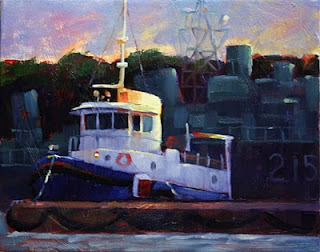 8x10 oil on canvas
The Jerry C., a modern Tug, is highlighted by the evening light against the greys of the destroyer "HMCS Haida" in Hamilton Ontario. The HMCS Haida has been restored and lies at the Naval Base in Hamilton. The Haida is the last remaining example of the 27 Tribal Class destroyers built for the Royal Canadian Navy , the Royal Navy, and the Royal Australian Navy between 1937 and 1945. She did service in the Second World War.
Posted by Catherine Jeffrey at 5:16 PM

Nice nautical painting with great late day light, and with the storyline of the tug working its barge in the shadow of the old destroyer.
You've been busy, Catherine!

The light hitting the tug is wonderfully done. Enjoying all your boat paintings of late.

You are truly in your element when it comes to darkening daylight hours. The effect is magical and pure "Catherine", the type of magic always to be found in your work. The "stage light" falling on the central subject is brilliantly done, with the mysterious war-like shapes in the background. OK, my imagination took flight, but it is very well painted!

This is so damn awesome!

Absolutely wonderful, Catherine. I love the way the light shimmers at the horizon line and then translates down onto the boat. Beautiful!

Catherine, it looks like you loved painting this. Your lighting is handled so beautifully. My favourite bit is the light on the ship. Perfect!